Anyone who has been following my blog will know that WebRTC has become my latest passion. I’ve written four or five articles on the subject and have at least ten more inside of me waiting to come out. Actually, ten might be an understatement. The deeper I dig, the more I discover that I want to write about.

As part of my exploration, I have been scouring the Internet for articles that explain WebRTC at both the 50,000 foot and one inch levels. While I have found plenty of good stuff that speaks about WebRTC at a high level, I have yet to find a really good nuts and bolts approach. Yes, there are a few attempts out there, but they are either poorly written, vague when they need to be specific, or just plain wrong.

So, I was pleased when I stumbled upon Andrii Sergiienko’s book, WebRTC Blueprints (http://www.packtpub.com/webrtc-blueprints/book). In its 160 pages, WB details everything from creating a simple point-to-point video call to WebRTC on mobile platforms. And when I say detail, I mean detail. Every chapter is chock-full of javascript and html to create and demonstrate every concept the book presents. 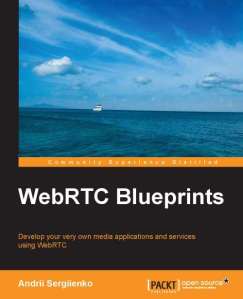 I can’t say that I’ve had a chance to actually implement every example program in the book, but I did take the time to create, compile, and deploy all the code in Chapter One. This involved creating a WebRTC signaling server and a webpage that sends and receives video and chat.  The fact that I had both the client and server sides to play with make this book unique amongst most other resources I’ve explored. As someone who wants to completely understand WebRTC, I want to work with all aspects and not just little bits and pieces.

Now, like everything in life, WB has its pros and cons.

Cons withstanding, I appreciate that this book exists. Granted, I had to work harder than I wanted to, but I can honestly say that I am much smarter about WebRTC now than I was prior to opening the book. It’s my hope that there is a second edition that addresses some of the cons. That would make this worthwhile book that much better.

← Video Conferencing Fundamentals
Come Together: A Collection of Articles Designed to Make you a SIP Rock Star →