Living (and Working) the Good Life with SIP

Please don’t tell my boss, but I woke up really early this morning and drove to my lake cabin. I didn’t take a vacation day, but I am not playing hooky. I started working minutes after pulling into the driveway and setting up my PC. A lot of my time has been spent working on a guide for understanding and implementing SIP trunks on an Avaya Aura system, but I’ve also made and taken quite a few telephone calls from customers and coworkers.

And no, they are not calling my cell phone. Thankfully, most people don’t even know that number. They all call my office phone number, but instead of the calls ringing on my Avaya 9641, they ring on the various mobile SIP phones I use. I say various because when I’m sitting at my “desk” (which is really a table by a window that overlooks the lake) I like to take calls on my PC, but when I am wandering around down by the water I want them on my iPhone. Different devices, different configurations, different applications, but the same number.

That, my friends, is the power of SIP. It allows me to choose the method of communication that fits my needs at any given point in time. With SIP, work isn’t a place I go. It’s what I do no matter where I want to do it.

Just for grins, let me tell you the different applications I use throughout the day. First, I should point out that I am long past the days when voice is king. Given a choice, I would much rather send an instant message than call someone. It’s not because I am anti social. Instead, if I have a simple question that can be answered in a sentence or two, I will always choose IM. I happen to like the IM provided by Microsoft Lync, but I’ve used other systems in the past with very few complaints. Lync, of course, is SIP based.

Voice on my PC is provided by my Avaya One-X Communicator for SIP. It has a clean interface that mimics my desk phone without feeling too old fashioned. I get call logs and access to Avaya features such as EC-500 and Send All Calls. I simply plug in my Plantronics USB headset and I’m good to go.

It’s a completely different story on my iPhone where I run a neat little application from Mediatrix called Media5-fone. The basic version was free when I downloaded it from the iTunes store, but I coughed up 99 cents for TLS (secure SIP signaling). I could have spent a few more dollars for G.729 and no banner ads, but I’m basically a frugal guy and 99 cents got me what I wanted. One of the things I love about the Media5-fone is that it works well on both my wireless and 3G connections. That allows me to wander away from the cabin and still be able to make and take work calls. Do I get all the extra Avaya features that my One-X Communicator gives me? No, but make call, answer call, release call, hold call, conference, and transfer are there and that’s usually enough to get the job done.

And this all comes via my unlimited data minutes! No wasted cell minutes for me. 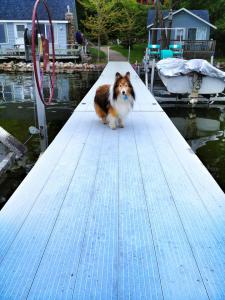 The point of this blog is not to tout Microsoft, Avaya, or Mediatrix. There are other companies with products that provide similar functionality. The point is to say that with SIP I have choices – choices as to where and how I work. I am just as productive here at the lake as I am in the office…or at home…or in a hotel room. Of course, the downside is that I pretty much work all day long, seven days a week, but that’s a blog for another day. Right now I have more calls to make before I wander down to the lake for loon watching and walleye fishing.

P.S. The little fellow in the picture is Basil. Since he would much rather be up here at the cabin than back in the city he is completely sold on SIP mobility.

← Move it on Over — SIP Redirection
No Shirt, No Shoes, No Quality of Service →